Intro: In this video, I'm going to share five power poses all public speakers should know and practice.

Speaker: (00:16) Hello & Welcome. I'm Devin Bisanz and I am a public speaking coach. I coach championship speakers and I also coach corporate speakers, CEOs, managers, executives. Thanks to this whole COVID-19 situation I had to bring my training program online and I love it. It's been unbelievable. I put together my online training program just filled with a bunch of public speaking exercises you can do without an audience. And I'm talking to my brother-in-law. I'm like, geez, you know, how am I going to start promoting it? He's humming and hawing and he said, “Why don't you take those little exercises that you show people and turn them into quick tips, record them, post them on your social media sites and go from there?”

I thought, Hmm, that's not a bad idea. That's a good idea. Let's do it. Now. The first lesson I share with everybody is a lesson on body language.

Speaker: (01:15) Now, a lot of speakers, they come to me and they're like, well, you know, I don't use my hands. I'm not a hand talker. I'm like, okay, fair enough; but, if you don't use your hands, you're still saying something to an audience. So whether you use your hands or not, you're still talking with your hands. I'm going to give you a few examples. The first example is if I just have my hands to my side and I turn off the volume, I want you to guess what I just said. What was I talking about?

Speaker: (01:48)I'm saying things, but you will never be able to figure out what it is. Now, If I just use a little bit of body language, but I turned the sound off. Even if you don't know what I'm saying, you have a better idea of what sort of feeling I'm trying to get out of the audience, or what am I saying with my body language. The second exercise I do is that when I worked with a group of people, I bring up somebody in the audience. I have them stand in front of the group and just put their hands, their side and just say, hello, welcome. Hello and welcome. Hello and welcome. Then I asked the audience, well, did you feel anything? Sometimes they say no, sometimes they're not sure. Next, I get the speaker to do this, put their hands as a power pose. This is power pose 1 by the way. 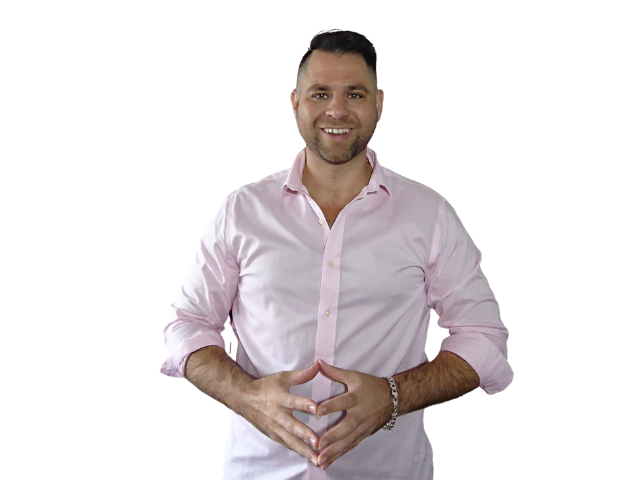 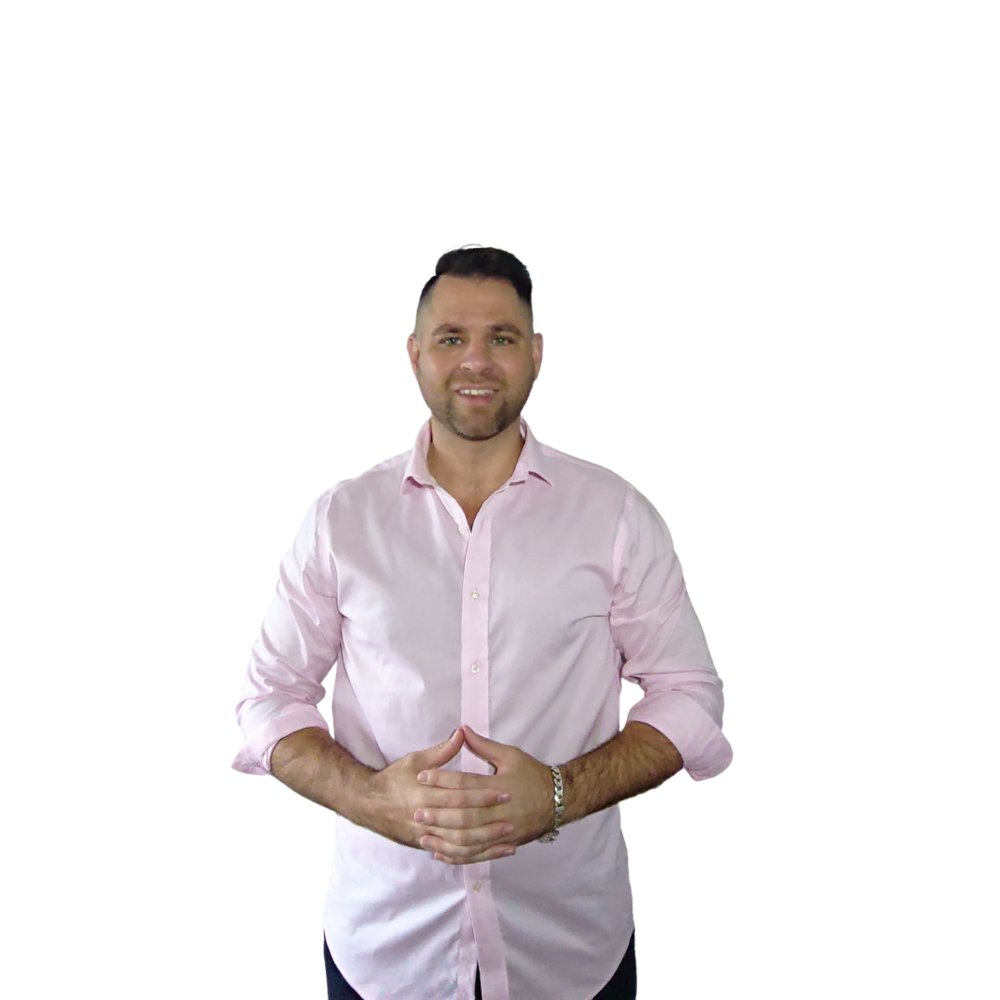 Speaker: (02:37)If you want a lot of public speaking exercises, tips that you can do on your own time hit subscribe like button. Thank you very much. As we move along, I want to be making videos that you want, content that you want, but here's the very first power pose, fingers together. You put them together. You can touch in front, none of this. So no going this, just touch your fingers and hold them. Shoulders back. Nice, powerful post. Amy Cuddy talked about it in her Ted Talk video years ago, so I defined five power poses. If you watch all the great speakers, you'll see them moving through these five different poses. The first one, fingers together. The second one is actually out like this. 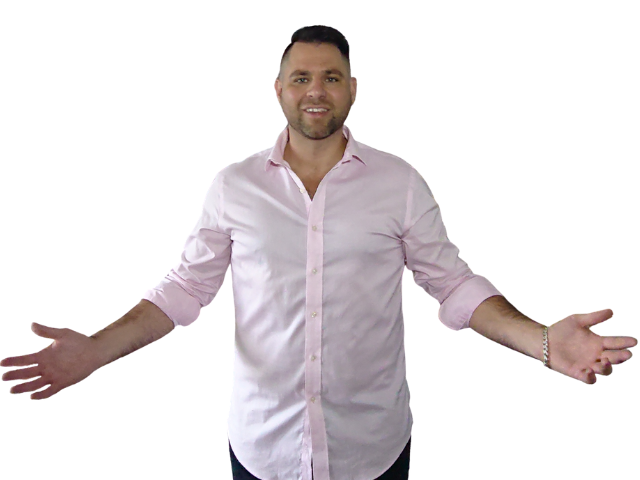 Speaker: (03:36)Going back to the first pose; remember, Just one hand lightly over the other, none of this clenching, no clenching, just slightly over the other and then hands out. So this is number one. This is posture number one, and this is posture number two. Now I see a lot of YouTubers. They made a lot of money marketing. I see them doing keynote speeches and they'll have their hands up. I'm thinking about one guy in particular, but he has his hands out and he curls his fingers like this. No, no, no! Just open up your palms. Nice and open. Be open, open to this is power pose. Number three, up like this. 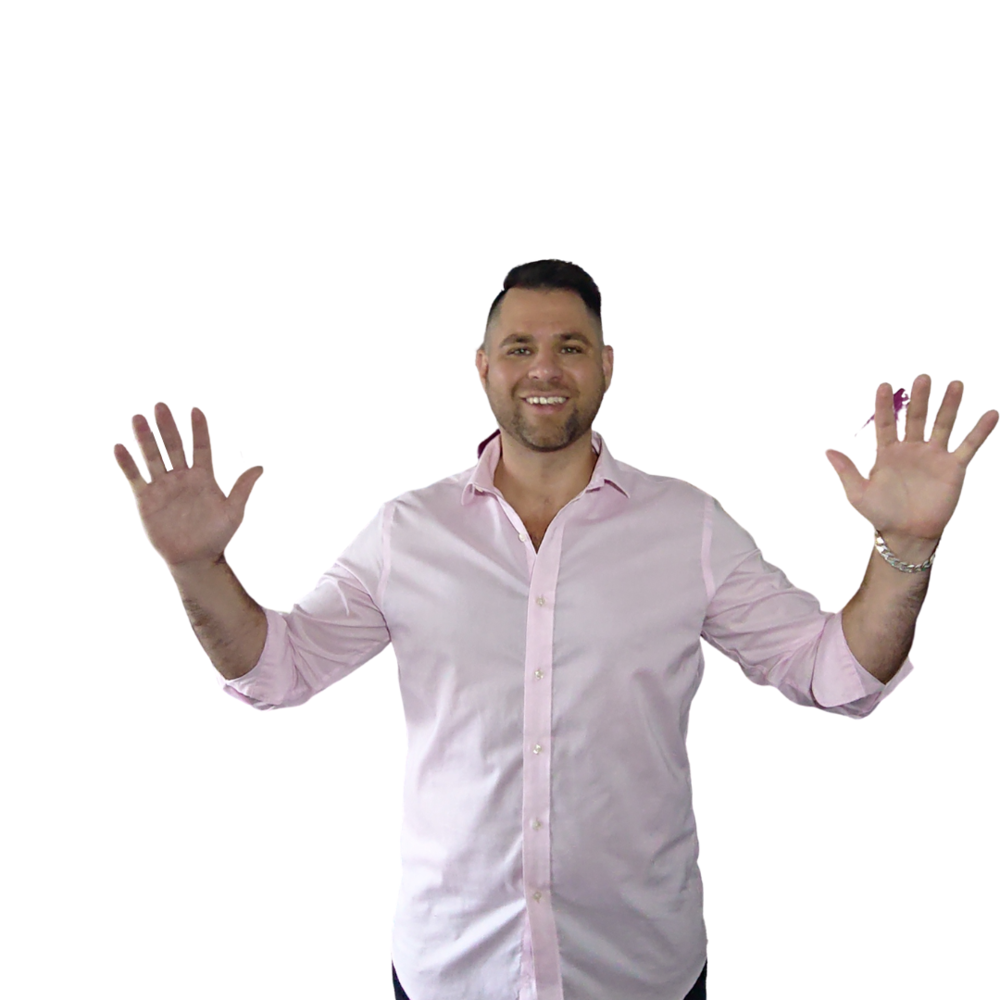 This is good. It's excitement. Number three, get comfortable just holding your hands up like this. And then number four: hands on hips. 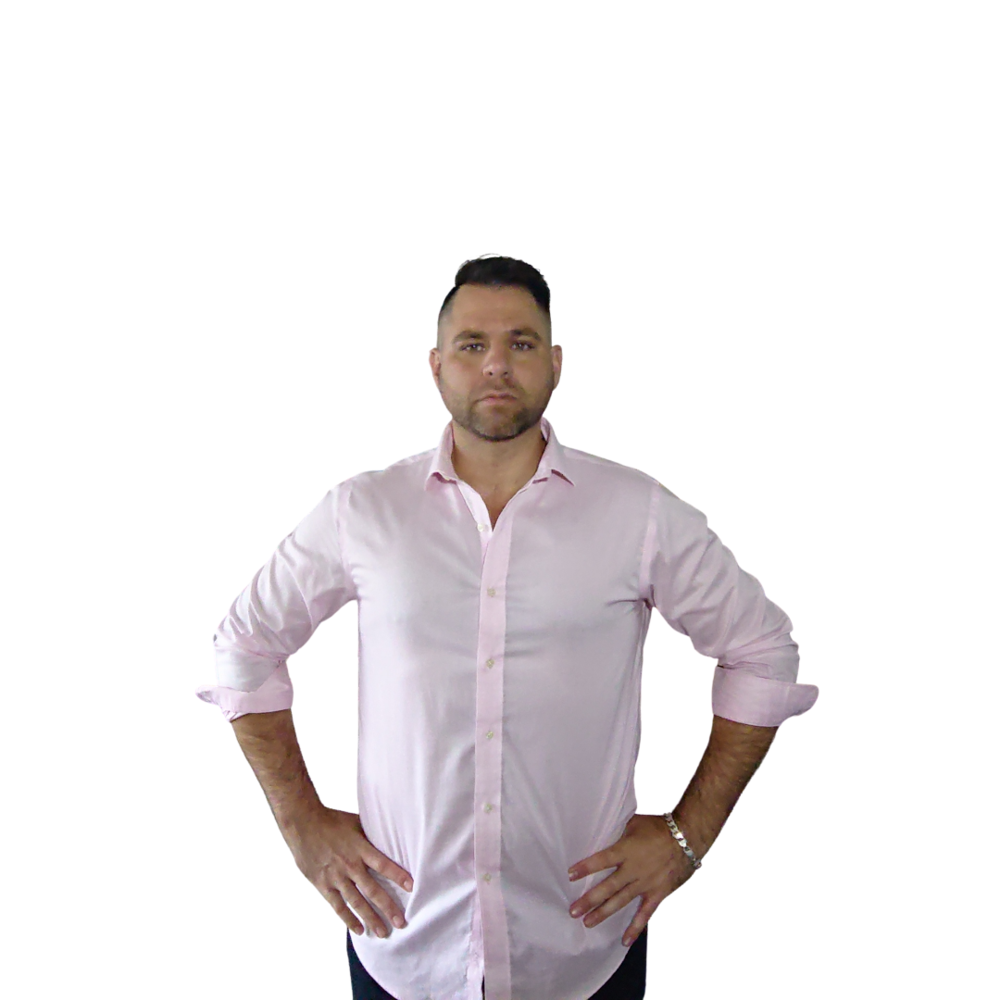 Boom. You know, this is a good one. You you're talking to an audience. You're like, you know, the moral of the story is be careful what you wish for. And then you put your hands on your hips and they do a sweep with a little smile on your face. Yeah, it doesn't have to be that moral! My point is then when he hit that pause, you put your hands on your hips, just look around the eyes. Stand casually, take a look around the audience.

Speaker: (04:49) Boom. Start talking again. So this is number one, number two, number three, number four. And the fifth pose that I like to practice, especially to show people. Cause they don't think it's that they don't use it. The pose is you cross your arms. 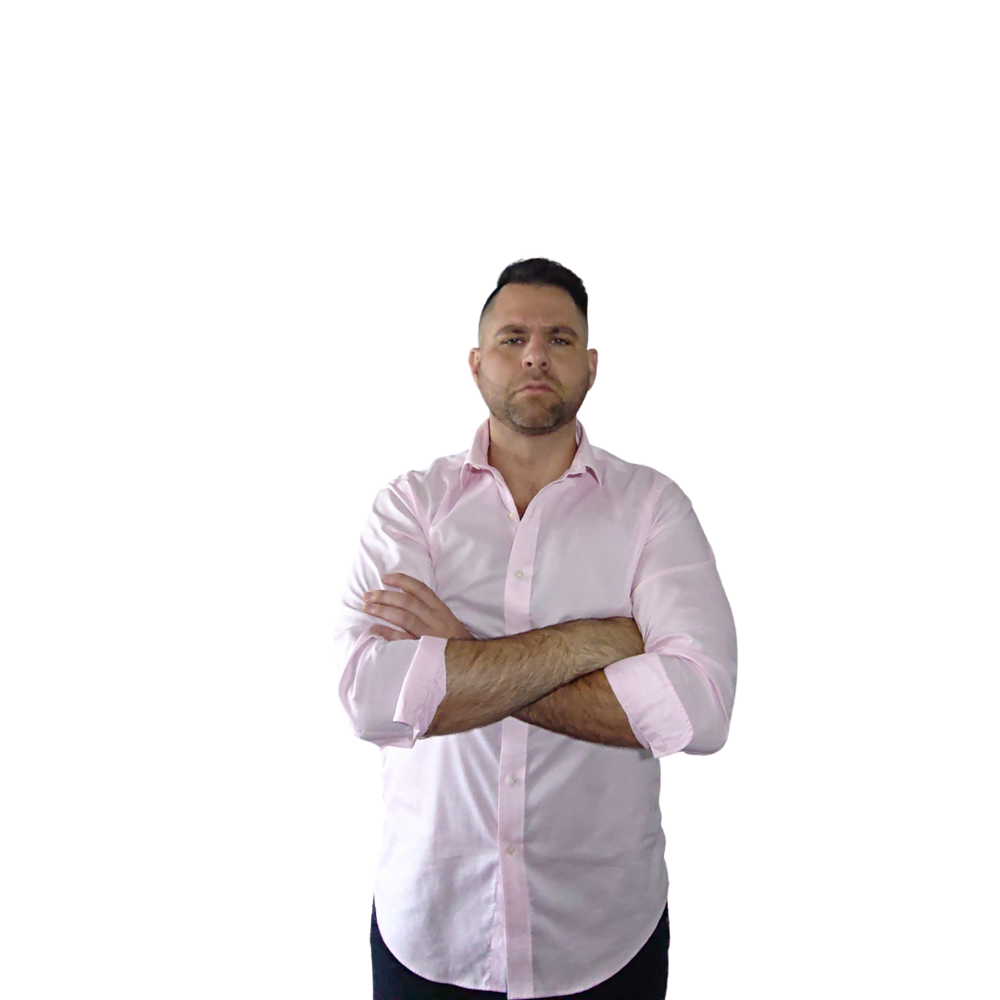 Now people always ask, why would you cross your arms? Like cutting the audience off, but not necessarily. You know, a lot of times I go into training situations where I train managers, salespeople. And when they come into the room, they're there to train me. They, they think they're not there to listen now. Not at first. I have to win them over. I have to win them over. How do I do that? I just stand in front of them, and before I say a word, I crossed my arms. I look, I stand and just go through making eye contact with each person. I look at each one in the eye and a put a little smile on me.

Speaker: (05:40) Hello, welcome. You know, when I was about 13 years old, my, I went to my auntie's house and she said, you know, I heard this joke today. It's got kind of a bad word in it, but it's a good joke. Would you like to hear it? And that's what I say to the audience. Would you like to hear it? I say that to them and then they all always go. Yeah. Yeah, of course. Everybody wants to hear it. And then boom. I tell the joke. And after that everybody's open. Everybody's ready to listen. Everybody does what I say. So if it’s about taking control then this is a good one. This is a good one. Especially if you're amongst your critics. If you're amongst your critics, you want to be able to take control of them. So let's go through the poses together; one, out, back up, back down, back to the side, boom, hold it up here.

Speaker: (06:38)Now, for those of you, I'm just going to finish this off and remember like, and subscribe. All that stuff is awesome. But for those of you who are like, well, you know, I still don’t buy it. You're still on the fence about body language. I'm going to give you another demonstration. Have you ever known somebody? They have their fish clenched like this, and smokes coming out their ears and their eyes are tight. And then they go like this. I'm not angry. I'm not angry. I'm sure you see kids do it all the time. The point is, is when you're looking at that person, do you believe their body language or, do you believe their words? I'm not angry.

Speaker 1: (07:23) I'm sure you believe their body language first. Everybody does. It's incredibly important that we speak with say the same thing with our bodies as we do with our face as we do with our words. Because like in that demonstration, that's exactly what the audience is looking at. They're looking at your body. They want to know that you're comfortable, that you're happy and that you can move just calmly through these poses. And they'll look like you're just a professional right out of the gate before you even say a word. So practice those poses. Have yourself a great and wonderful day. I'm going to see you in the next video. 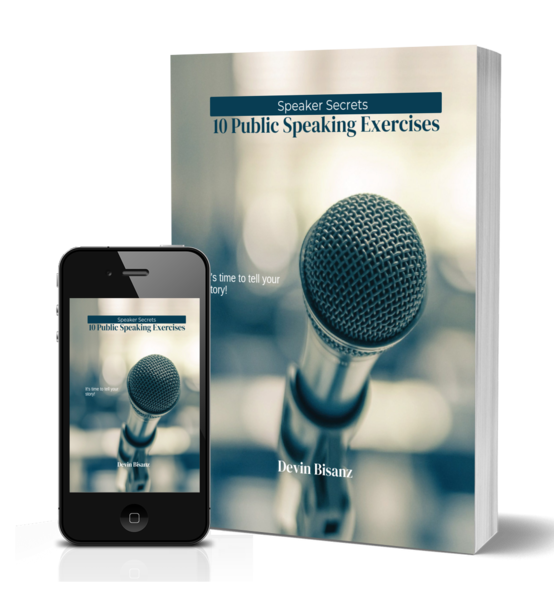 Previous 3 Steps To Taking Back Your Identity
Next 1 Simple Trick For Adding Humor To Speeches... Wait For it